Why Do Some Boosted Posts Get

Your post is ready to go, you hit BOOST and BAM Facebook rejects you. WHY? Keep reading to find out!

Why do my Boosted Posts keep getting rejected?!

Has this happened to you? If I only had a nickel every time I had a boost rejected. Well, I’m here to demystify this for you!

Boosted posts generally should have 20% or less text in the photo. Now, this has since changed but for a long time, images with text in them would consistently get rejected. A fellow I talked to the other day was having a problem not being able to boost his post. I asked to see the image and sure enough, almost all the text. He tried again with a simple picture and all the text in the body of the post, and guess what? IT WAS APPROVED!!

Researching this it sounds like Facebook has since gone away with the rule but if you find you can’t boost something, try reducing the text in the image!

How ELSE do boosts and ads get rejected?

I’ve had it happen that boosts get rejected when you’re hiring someone and you pick a specific age range, that could be considered discriminatory. Advertising for housing you have to be careful and the other one I’ve had boosts rejected are for politics. Local, provincial, federal. If you’re boosting posts for any of these you’re going to have to verify your identity. 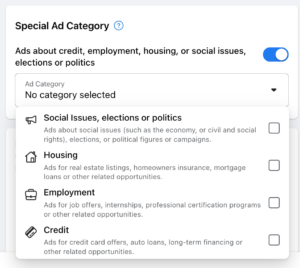 Facebook wants to know who you are if you’re advertising for:

And once you are verified, every time you set up a campaign around one of the issues above (yes even for hiring) you must select the button that applies to your campaign.

I worked on a local political campaign and had to submit my license and a picture of myself to verify it is actually me. THEN, when advertising, you can’t adjust the age range or other audience tools as per usual as it could be considered discriminatory.

Have a question about Boosted Posts or Ads being rejected? Let me know if the comments below!