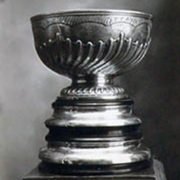 The series is knotted up at a game a piece after two exciting overtime games. Those placing bets might as well just follow their heart because it’s basically too close to call if you’re relying on logic and each team’s performance in games 1 and 2.

Can the same be said for the team Twitter accounts? If the cup were handed to the team with the best social media presence, who would be declared the victor?

First, we must establish what “best” means. We believe that a great Twitter account helps a person establish a personal connection with a business or entity. From the business’s (or team’s) standpoint, an account should align with the image and values they portray and become more passionate about their product in order to facilitate purchases. In the case of the NHL, purchases include things like tickets, merchandise, and television/streaming subscriptions. The goal of these accounts should be to recruit new fans and engage those who are already fans.

I always say that the best marketing is a great product or service and, in this case, both the Hawks and the Bruins have iced an amazing product as has been made evident by their respective playoff runs. They already have that advantage over the competition so for this head to head matchup, we must establish some criteria.

But first! (I’m sure the suspense is killing you) it should be noted that Chicago and Boston are very similar hockey markets. Before looking at the accounts, it could be assumed that each team has a similar following based on annual revenues in these Forbes NHL Teams Valuation Rankings. 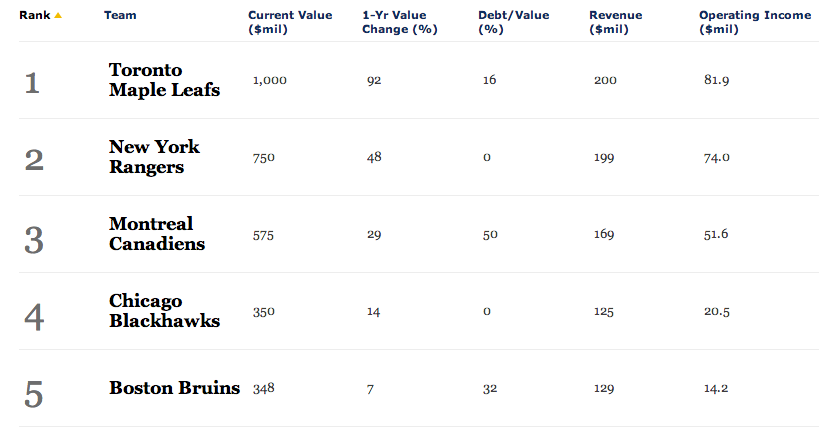 As chosen by the TSN panel..err..Strategy Lab panel, each team’s account will be evaluated in a seven game format with each game being based on a different competency category:

Tweet Frequency – the team’s ability to find a quantity-of-tweets “sweet spot”.
Game 1: Following Quantity – number of followers.
Game 2: Quality of Content – the degree to which a team’s tweeted content is dynamic and compelling
Game 3: Personality – the account’s ability to establish a twitter identity that aligns with the team’s and garners interest.
Game 4: X-Factor/Standoutishness – the team’s deviation from tweeting norms that often make for a dry, uninteresting feed.
Game 5: Engagement and Response – the team’s ability to mobilize/respond to followers.
Game 6: Faux Pas Avoidance – avoidance of spelling mistakes, rookie mistakes, and twitter worst practices.
Game 7: Contributing Platforms – a look at the quality of each team’s most commonly used twitter-connected app (ie. Instagram). 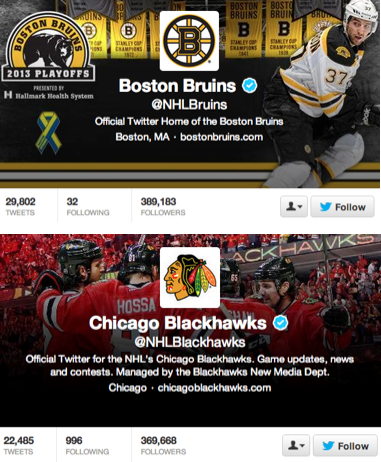 Recap: Boston edges Chicago out by an almost negligible 20,000. These extra followers could be due to their more recent cup run having taken place when Twitter had increased in popularity since Chicago’s championship season in 2010. Another reason could be the 7,300 edge in total tweets.

Recap: Boston starts it off with a nice picture showing the pre-game festivities, evokes emotion with the Boston Strong theme, and makes fans following on Twitter feel like they’re really there. The Blackhawks counter with some lineup information and let everyone know that Ben Smith is in and Marian Hossa is out after an incident in warm-ups. The tweet lacks the degree of insider detail you’d expect from a team’s official account.

Recap: Tweets with any sort of personality that come even close to touching that of the LA Kings twitter account are hard to come by with these two squads. If this were a real game, it’d be a bit of a snoozer. Luckily, the Hawks’s Twitter team just came through with an awesome tweet that shows the tweeter is a real person — capable of having emotions. In doing so, it made me feel like I’m in Ben Smith’s skates and don’t doubt I’m alone in feeling that.

Recap: In comparison to many great accounts that aren’t afraid to do something off-the-wall or out of the ordinary, these two play it pretty safe. The one standout thing that the Hawks do is retweet Hawks-related content from supporting organizations and subsidiaries like the Cubs picture tweet above. This, in my opinion, engages the community and helps prevent the team and the sport of hockey from becoming siloed. The Bruins have ample opportunity to do the same and more as the city recently became more tightly knit after the Boston Marathon tragedy but there is no evidence of this on the Bruins Twitter feed.

Recap: The only recent effort at fan engagement made by either team was this tweet from June 15th by the Chicago staff. Fans were encouraged to ask their questions to the hosts of a third-party show. Plenty of room for improvement in this area for both teams but Chicago narrowly escapes this one with a victory.

Recap: In this crucial game 6, with the Bruins on the brink of elimination, it became a lesser-of-two-evils battle. Chicago missed the mark (and constantly does so) with hashtag overuse. Every tweet during games is adorned with a head to head hashtag. I, for one, am skeptical of the effectiveness of these hashtags and think they should be used in moderation but Chicago’s own metrics will be the final judge of that. Boston, whose tweets always include the initials of the writer despite there being no documentation of the full name of the initial-bearer in the bio or previous tweets, luckily had one tweet that included the initials “B.B.” amidst the thousands of “C.S.” tweets. The slightly less stinky team in this one was the Bruins, who force a game 7. 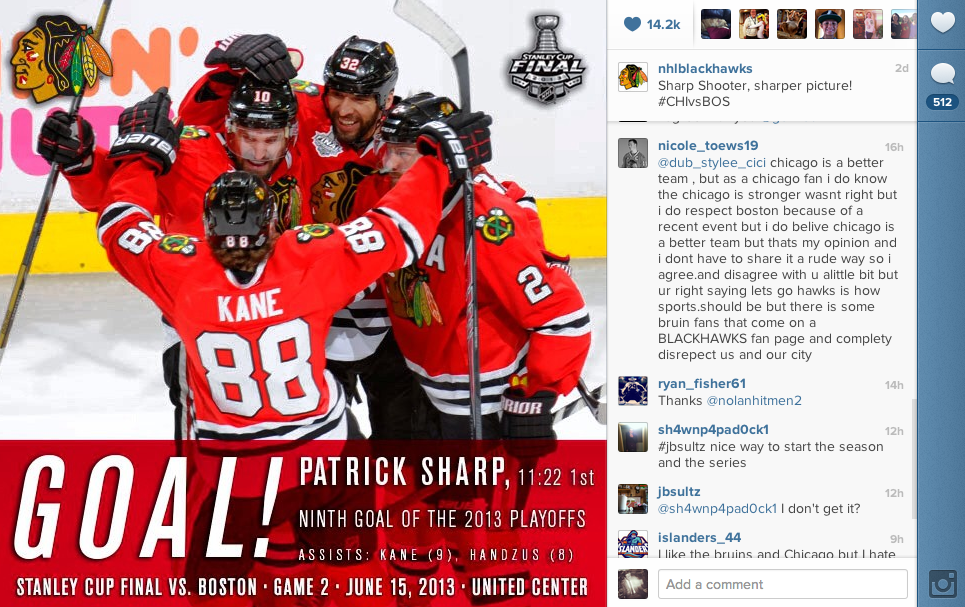 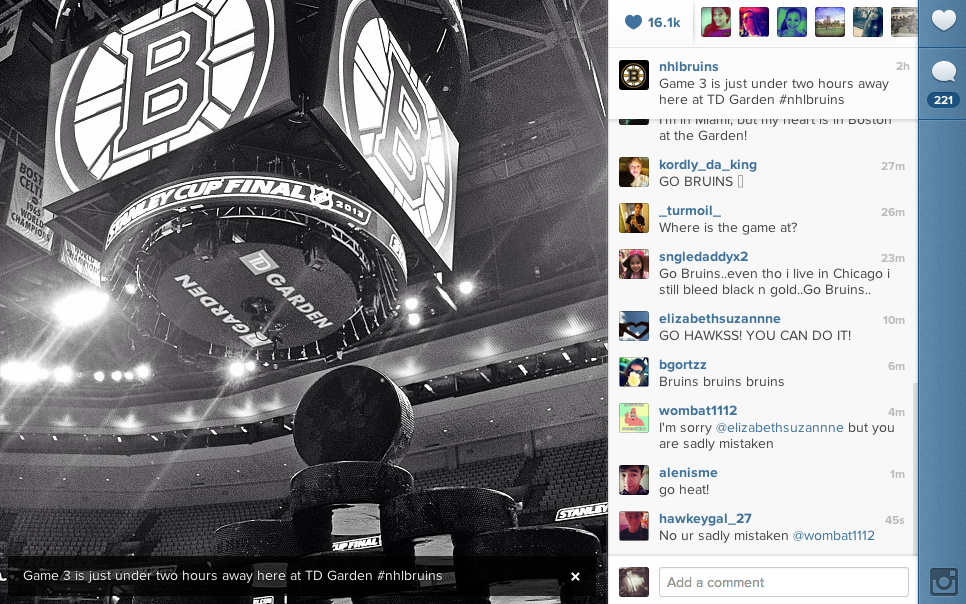 Recap: As is expected in game sevens, a valiant effort was put forth by each team. Chicago really captured the energy following Patrick Sharp’s impressive 9th goal of the playoffs. The post was timely but lacked the organic feel Instagram enthusiasts have come to know and love. Boston’s pre-game hype picture, on the other hand, is quite likely taken with in iPhone and looks great with a black and white filter. It hasn’t been doctored by any gaudy text and really uses Instagram properly with a post that likely appeals to ‘Gram enthusiasts.

Each team does a good job of delivering hockey news and updates in a traditional way. The only real instance of going to the next level in terms of non-traditional media was when Boston really embraced the platform that Instagram is with an organic-feeling post. Twitter is dominated by witty and compelling people and businesses. Neither of these teams has truly found Twitter’s sweet spot. If they’re looking for an off-season trainer, it should perhaps be the Los Angeles Kings account. 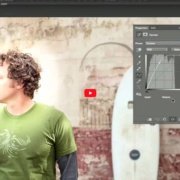